Jason and I have been talking about getting a puppy for Landon/hunting dog for Daddy for a little while. We have just been waiting for the right time. When some friends of ours had a litter we went and checked them out!
We had some discussions over color/sex but I think it worked out well. I know I wanted a chocolate female for sure but a chocolate male is what we ended up with.
Everyone welcome our new puppy Camo! 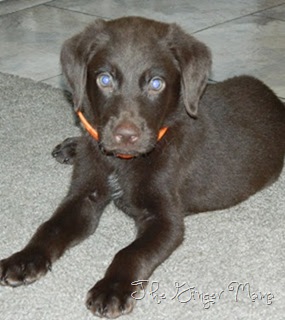 He's a sweetie! He's pretty calm (so far) for a lab puppy. He follows Landon EVERYWHERE and Landon just loves him!
This was Landon's reaction to Camo when we first brought him home! 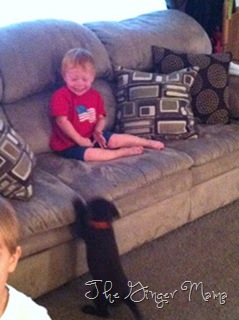 He was so excited!
We had our friends Kathryn and Charlie over Saturday night. They have a son named Easton around Landon's age and they are best buddies! So they had a great time playing with Camo. They also discovered Hokey Pokey Elmo (again) and we had to play with him ALL NIGHT.
I love how Easton shakes it all about ;) And yes, that's my Betty Rubble (as people call it) giggle in the background.
It is VERY safe to say that Oreo DOES NOT like Camo. He just looks at me like, "Mom, why did you do this to me?" 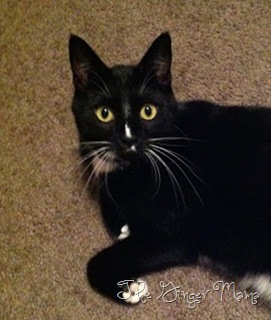 And the sad thing is is that Camo isn't even bothering him. I tell you what there is WAAAAY too much testosterone in this house! I guess I will just have to have me a little girl! ;)
This is the most curious little thing ever and he just wants to be where ever Landon is (which I love!) 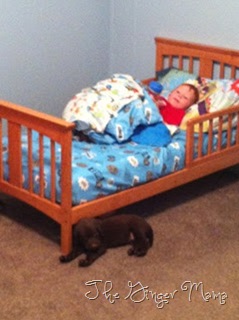 If I knew he would sleep there all night I would have left him there but we ALL know that would never happen! 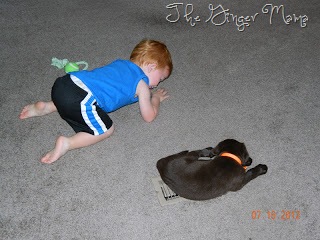 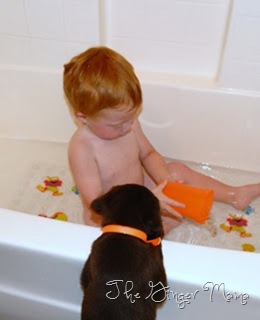 Checkin' out the bath situation...
On another note I took a chance on a new Droid Pantech Pocket when Jason's phone decided to die and I had it for 30 days and that was enough for me! I went back and got an iPhone 4 and I've never been happier about a piece of technology! It's silly I know but I would get so frustrated with that droid that I was ready to throw it against the wall! So I'm super excited! I ordered myself a pink and white otter box cover so I have to be super careful until it gets here!
We also had my aunt and cousins come this past weekend. I haven't seen them in about a year since my brother got married! That's the one thing I wish I could change is seeing everyone more often! 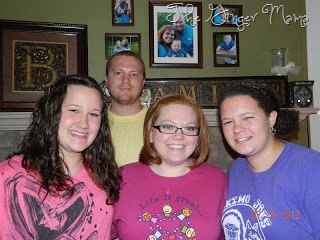 My cousins, Kelsey (left) and Libby (right), along with my brother in the background. 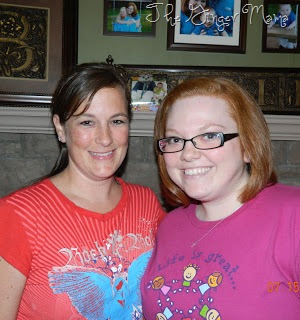 My aunt, Kara, who also happens to be my Mary Kay sis too! She's the one that got me started!
We had such a great time! I wish the girls would come stay with me for a summer one year! Maybe that will be next year!
I have also started reading Two For The Dough which is the second of MANY books from the Stephanie Plum Series by Janet Evanovich. So far it jumps in right where One For The Money left off. 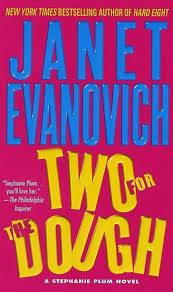 Another thing was I had to go pick up my poor baby from daycare. He was having some tummy trouble and they think there might be a little bug going around. When he FINALLY went down for a nap I went to check on him and this is what I found. 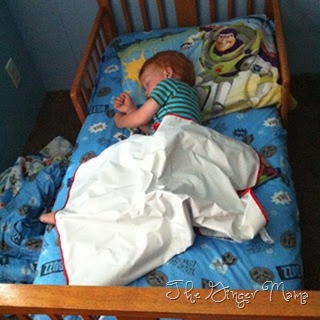 Yes my friends, that is his aqua doodle.....notice the blankets are on the floor to the left.......
So that's where we are right now! I have a few crafts and a new blog design in the works!
Until next time!
Gingerly, Whitney at Thursday, July 19, 2012
Email ThisBlogThis!Share to TwitterShare to FacebookShare to Pinterest
Labels: Family, Friends, Home, Landon, Reading